Insider Secret to Putting and a Possible Belly Putter Solution

Is this the answer to the Belly Putter Ban?

Can you Sidesaddle? We are not talking horseback riding here. I just watched a video and read this article from the WSJ (Wall Street Journal) – Titled “The Secret Weapon of the Putting Game?

I will admit I have never played with anyone who ever putted this way and frankly you look a little goofy doing it. That said Eight-Time Club Champion at the Olympic Club in San Francisco Randy Haag, is obviously very effective. I think I will start calling him Randy “Rick Berry” Haag. It reminds me of the unpopular between the legs free throws that Berry was awesome at in fact he still ranks 3rd all time in the NBA with a .8998 FT%.

Berry’s free throw style never caught on either but who could argue the success of shooting free throws from between your legs.

Maybe this will be Keegan Bradleys and Ernie Ells next putting strategy based on the Belly Putter Ban.

So who is going to be a Sidesaddle Putter? Do you think Keegan or Ernie will switch?

Below is the article from WSJ by John Paul Newport

The U.S. Golf Association has said that by the end of this year it will decide whether to ban putting with the end of the shaft anchored against the body. If it does, the rule would probably take effect in 2016 and thousands of players who turned to belly or broomstick putters as a cure for the dreaded yips, or simply because they wanted a better way to get the ball in the hole, will be searching for alternatives. Here’s one to consider: sidesaddle, with the ball positioned just outside the right foot (for right-handers) and the player facing the hole.

Sidesaddle putters are rare. Les Edelman, a practitioner from Roxbury, Conn., says that in more than a decade of putting that way he has yet to encounter another convert. John Hendricks of New Jersey, a sidesaddler since 1984 and an accomplished tournament player, has met only one. But a number of leading golf instructors argue that sidesaddle, or face-on, putting is in fact the most effective putting style out there. “It will probably take a Tour pro adopting it to make sidesaddle popular, but I have always said that it’s absolutely the best way of putting,” said Dan Pasquariello, a Golf Magazine Top 100 teacher at the Pebble Beach Golf Academy in California.

Dave Pelz, the research-driven putting guru, agrees. The best putter he has ever measured, including Tour pros, was a 10- to 12- handicap amateur who putted from the side. “He never, ever started a ball off line, and he was very good at distance control, too,” Pelz said. The two primary advantages are the simple mechanics of the straight-back, straight-through pendulum stroke, and the use of binocular vision.

“When you are looking at the target straight on, using two eyes that are horizontal, that’s how humans normally look at things. We have a tremendous ability to perceive depth and distance. But when you putt the regular way, your eyes are aligned vertically, and you have to swivel your head to see the target or you use just one eye. All that experience judging distance and seeing things accurately goes away,” he said.

Pelz doesn’t putt sidesaddle himself, primarily out of inertia and because few of his students do. “But if somebody told me I had to putt for my life, or the life of my kids, and gave me a few years to practice, I’d probably go with sidesaddle,” he said.

Sam Snead putted sidesaddle at the end of his career, after a nasty case of the yips destroyed his confidence putting conventionally and the USGA outlawed his preferred alternative, croquet-style. The rules-making body declared it illegal to straddle the line of the putt. Snead putted well sidesaddle but used a normal-length putter that required him to squat and thus minimized some of the advantage, primarily visual, of putting while standing tall.

The best argument for sidesaddle putting these days is Randy Haag. Last weekend Haag, 53, won the club championship at the Olympic Club here for a record eighth time—all putting sidesaddle. That’s no mean feat, since Olympic, which hosted last summer’s U.S. Open, is thought to have as many low- and plus-handicap members as any club in the country, with the possible exception of Champions in Houston and, on a percentage basis, Whisper Rock in Scottsdale, Ariz. Haag was also low amateur at two of the last three British Senior Opens and is a six-time Northern California Player of the Year. 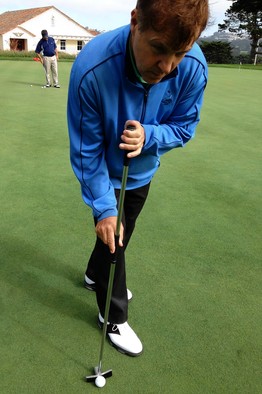 Haag started putting sidesaddle in 1996 after succumbing to the yips. “From 3 feet, I was making half my putts at best,” he said. The key to the stroke for him is letting the top end of the club “teeter” lightly in the fingers of the left hand, which he keeps dead still and away from his body. Using the thumb and index finger of his right hand, he pulls the shaft back and guides it forward. “I can’t tell you how many people ask me about it. They marvel at the simplicity of it, just looking down the line at the target and basically making a pendulum stroke,” he said.

The transition wasn’t easy, however. He practiced for six months before daring to use it in competition, and even then four-putted twice in his first round. By the end of the tournament, however, he was knocking in 40-footers and has never looked back.

Last week on the practice green at Olympic, I tried a few putts under Haag’s tutelage. The motion felt awkward. Repeatedly I misaligned to the right, as he predicted I would. “Most people who try it pop in their short putts immediately, but lag putts are another story. The feel is completely different than with conventional putting. It’s not a quick fix,” he said. Hendricks, on the hand, said he cottoned to sidesaddle almost right away. “I went from a badly yipping nine-handicapper who averaged 40 to 41 putts a round to a two-handicapper averaging 32 putts a round.” It took him about four weeks.

David Cook, the mental-game coach who wrote “Seven Days in Utopia,” a golf novel that features face-on putting and was made last year into a movie starring Robert Duvall, said that most golfers don’t find the transition as difficult as Haag did. “Facing the target, like you do pitching horseshoes or throwing darts, is a very natural way to putt,” he said. “If you were inventing putting from scratch, you wouldn’t even think of standing sideways to the target. The full swing is the way it is because you need to create torque to generate power, but you don’t need power for putting.” Cook advocates looking at the hole when putting face-on, as in pitching horseshoes, but most sidesaddle putters do not.

Cook and a few other online retailers sell long putters up to 50 inches or longer specifically designed for the face-on method. Per USGA regulations, putter shafts must be at least 10 degrees off perpendicular to the horizontal axis of the putter head. Hendricks has had good luck with regular, unmodified long putters. “Just step into it and see what feels comfortable. The less mechanical you are, the better,” he advises. But Dan Young, a competitive tournament amateur and former college player from the San Francisco area who tried putting sidesaddle for six months, never found a model that felt comfortable.

That wasn’t why he quit, though. “The main reason was the constant ridicule I got from everyone. It’s kind of like wearing plus-fours. You’ve got to have a thick skin and be a really great golfer to pull it off,” Young said.

The stigma could change, however, just as to some extent it has for belly and other long putters. Hendricks said he got teased a lot, too, initially. “After a while, I decided I didn’t care what people thought,” he said. “I just wanted to get the ball in the hole.”

A version of this article appeared October 20, 2012, on page A14 in the U.S. edition of The Wall Street Journal, with the headline: Secret Weapon of the Putting Game?. 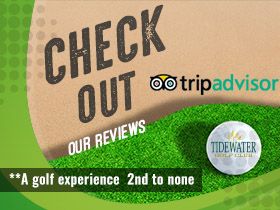 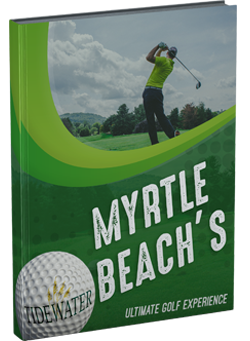 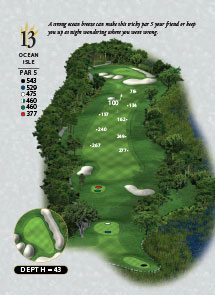